In 1972, Judith Thomas Stark created the Judith S. Thomas Foundation with her profits from the sale of the James B. Lansing Sound Co., maker of JBL speakers.  She and her husband, Milton R. Stark, bought the Stage Society Theatre at 9014 Melrose Avenue, in West Hollywood.  Supported by her foundation, the venue was renovated and reopened in February 1973 as the nonprofit Theatre Vanguard.

The Theatre Vanguard was a unique institution, an experiment in the support and presentation of contemporary performance art.  Here is the original statement of purpose of the Theatre Vanguard, signed by the founders: 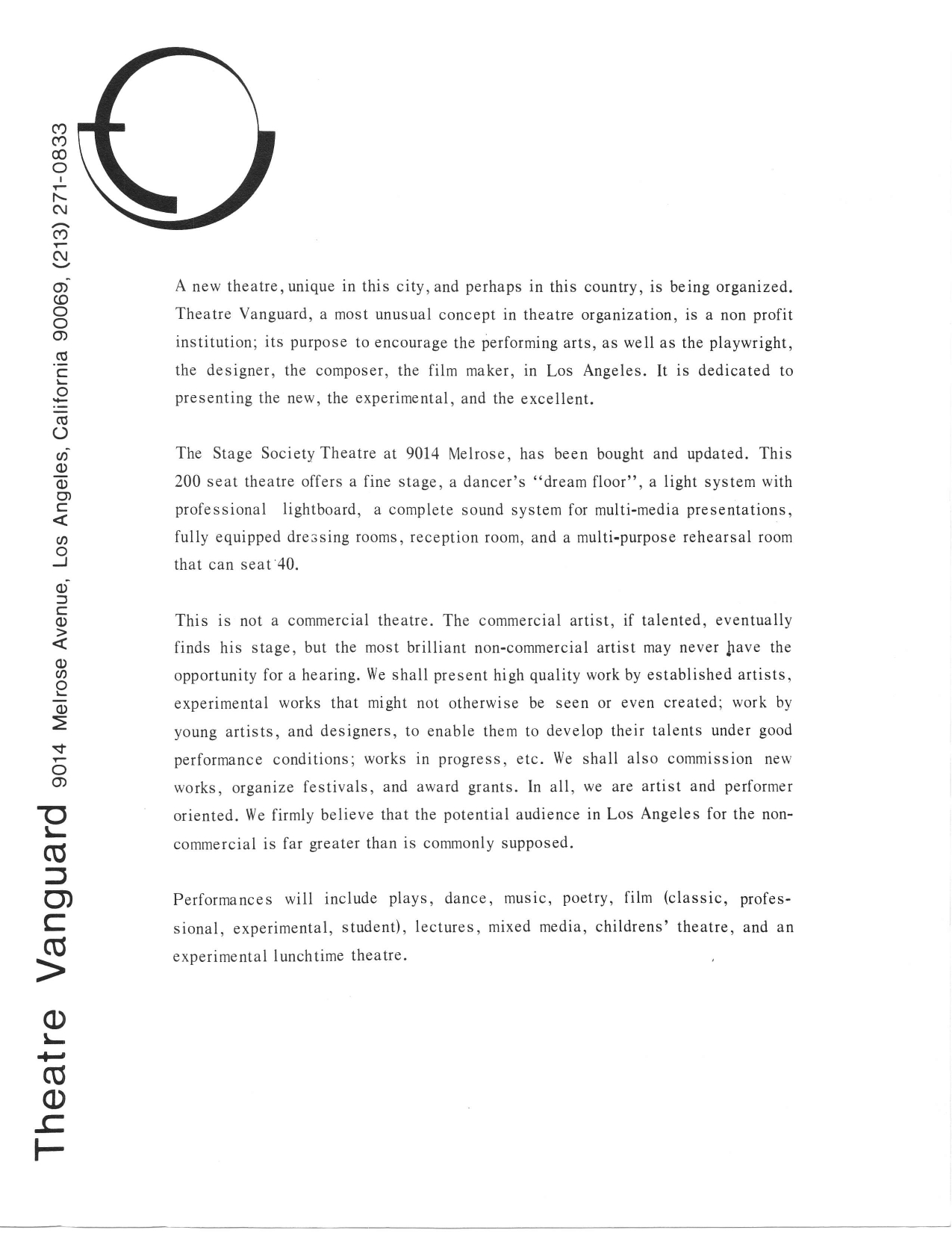 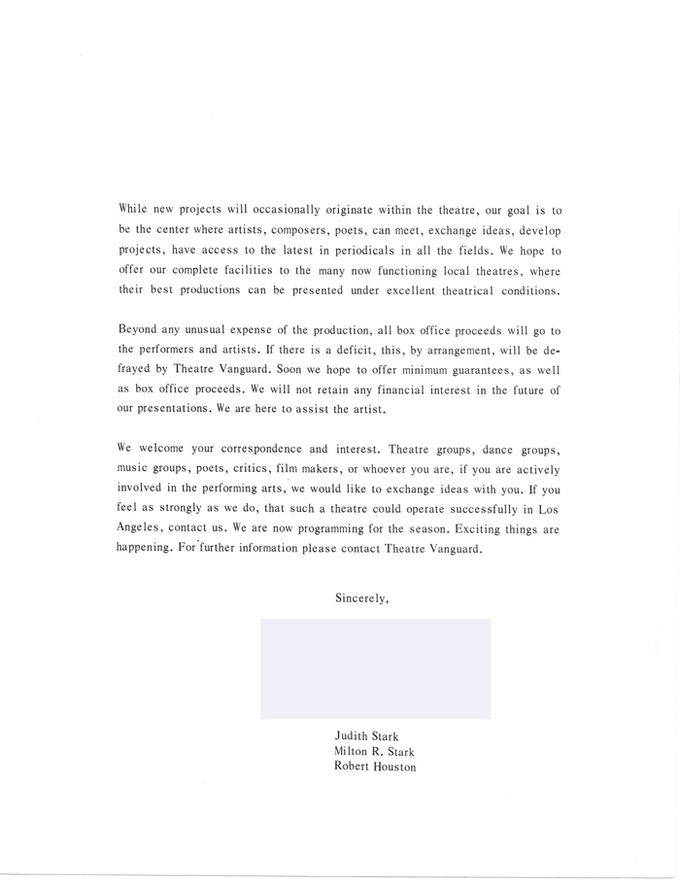 At the end of 1972, I was asked by Leonard Stein, who was on the Board of Directors of Theatre Vanguard, if I would be interested in producing a series of electronic music programs.  At the age of 27, this was an incredible opportunity, and so I accepted and created the series CURRENTS.  (In today's terminology, we would more properly use the term electro-acoustic (electroacoustic) to describe the music on CURRENTS.  But, at the time, this term was not in use.)

On December 17, 1972, a meeting was held of several artists and concert producers in Los Angeles: 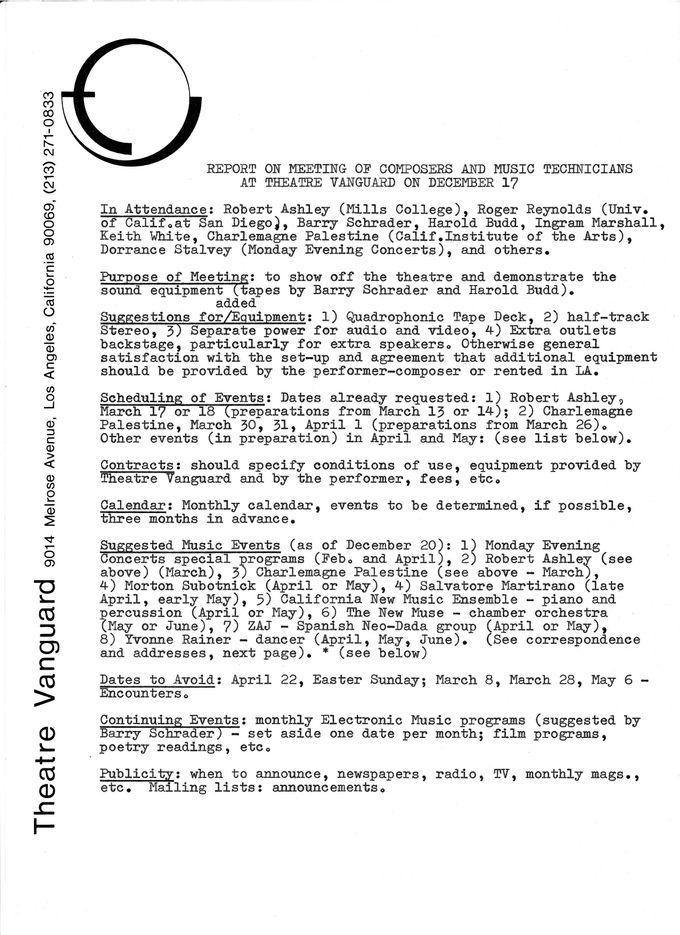 CURRENTS was, to my knowledge, the first ongoing series of electronic music concerts in the United States.  There were four concerts presented during the first season, in 1973, and they consisted of works from 44 composers from the United States, Europe, and Japan. 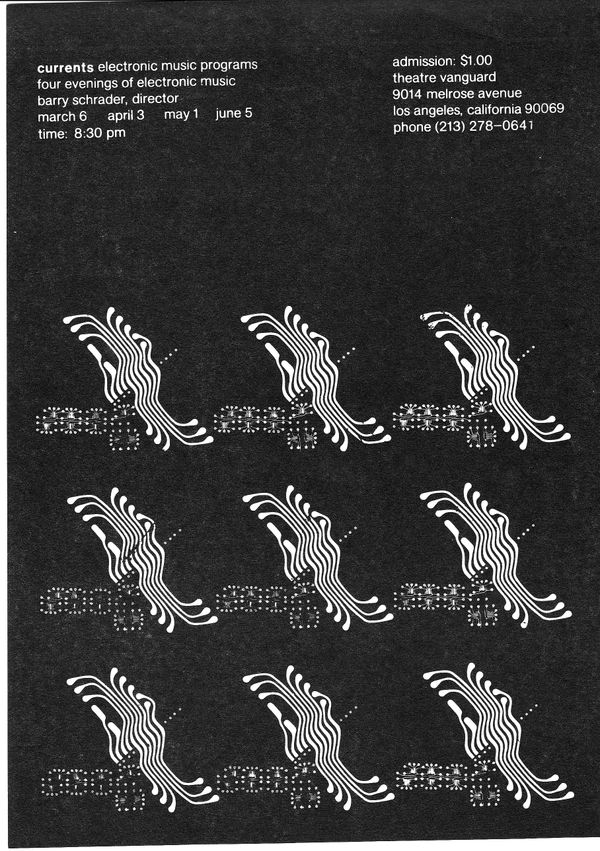 Here is the first page of the program for the initial concert: 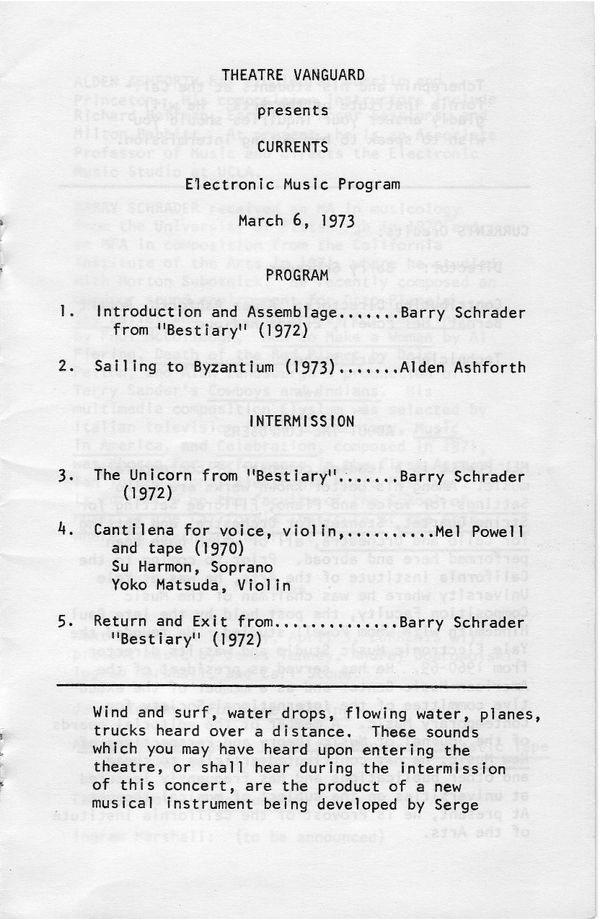 As you can see, in addition to the music presented, there was also a real-time presentation of Serge Tcherepnin's new analog system, the Serge Modular.  The reviews for the first concert were very positive.  Melody Peterson wrote in the March 7, 1973 issue of the Los Angeles Times "…Theater Vanguard's new electronic music series Currents could be to the 70s what Monday Evening Concerts [was to the past]…"

The Vanguard's unique policy of featuring only contemporary music, film, dance, and other performance arts was singular at the time.  It created a center for new work that, in addition to the newly formed California Institute of the Arts, where I was on the faculty of the School of Music, gave Los Angeles a much-needed boost in its artistic profile.  This was, in fact, the beginning of a kind of renaissance in the Los Angeles contemporary arts scene, one that lasted throughout the 1970s and 1980s.

It's often the case that people don't fully realize the importance of what they're involved with at the time.  Unfortunately, this was true of me in relation to the CURRENTS series.  As the Theatre Vanguard seemed to be a success, and they were documenting all of the programs and many of the artists who performed in them, I never thought to save all of the programs from the concerts that I produced from 1973 through 1978.  As a result, I don't have the programs for the rest of the CURRENTS presentations for 1973.  In fact, I have only a handful of programs from the entire run of CURRENTS.  The documentation for the Theatre Vanguard, as large as it was, may have disappeared, and there is, essentially, no trace of the Vanguard's accomplishments on the internet.

At the end of 1973, the Board of Directors issued a progress report: 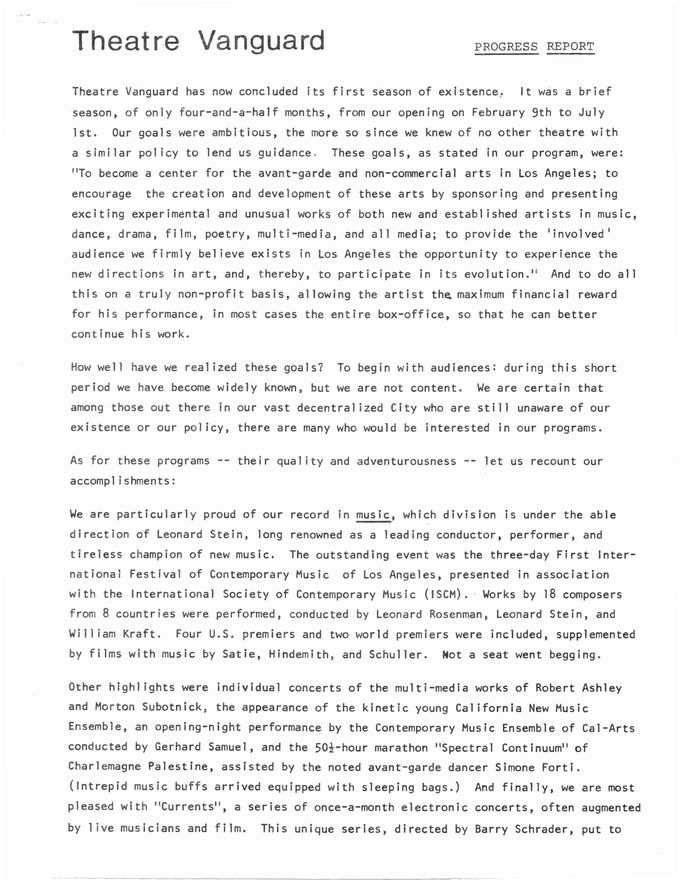 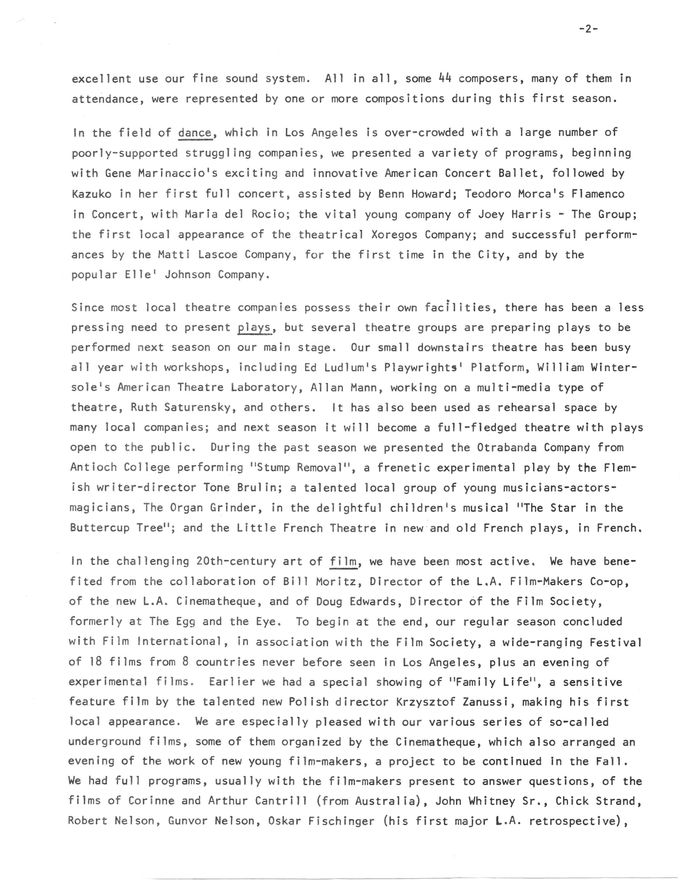 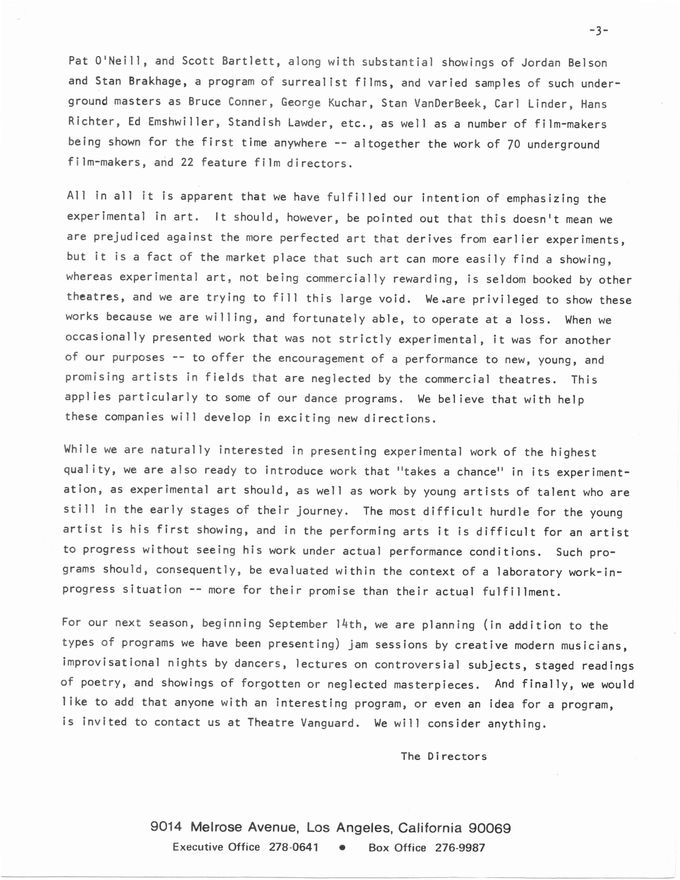 The Theatre Vanguard was built with a state-of-the-art sound system, configured for quadraphonic playback.  I'm fortunate to have received a copy of the documentation of this sound system from Leonard Stein shortly before his death.  Here is the document in pdf format:

In 1974, CURRENTS ran a competition for films with electronic music soundtracks.  This was an attempt to combine two of the Vanguard's main interests:  new music and experimental film.  The concert presenting the top six works was presented on May 17 and 18, 1974.  Here is the entire printed program from that presentation.  It lists not only the works presented, but also the complete list of the contributing directors to CURRENTS, along with the names of the Theatre Vanguard's Board and Staff: 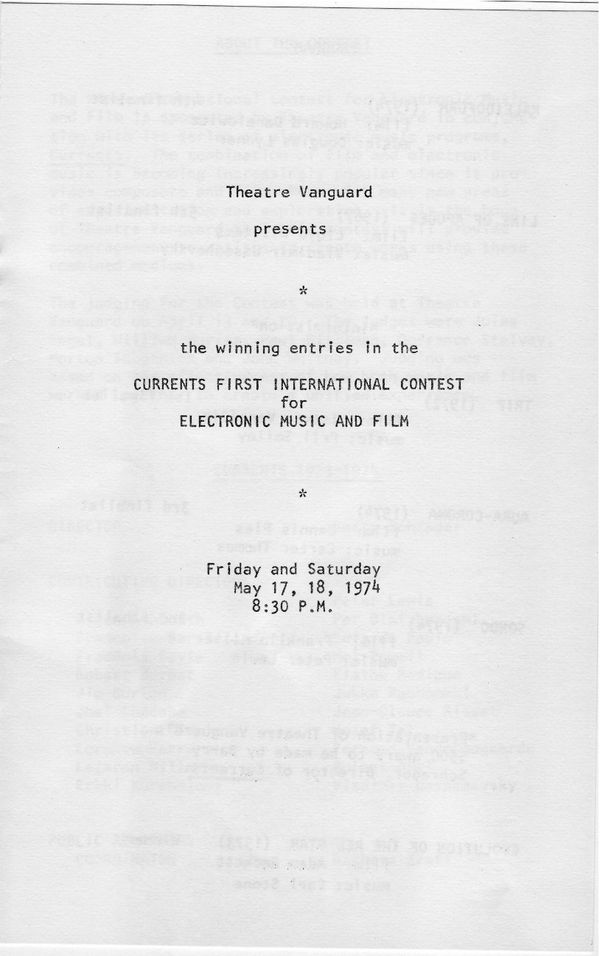 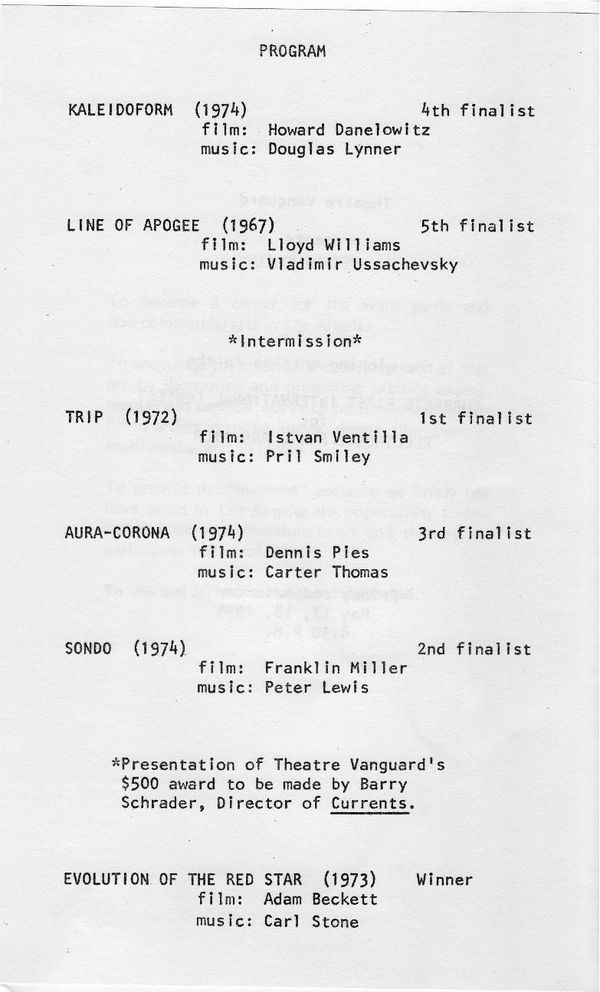 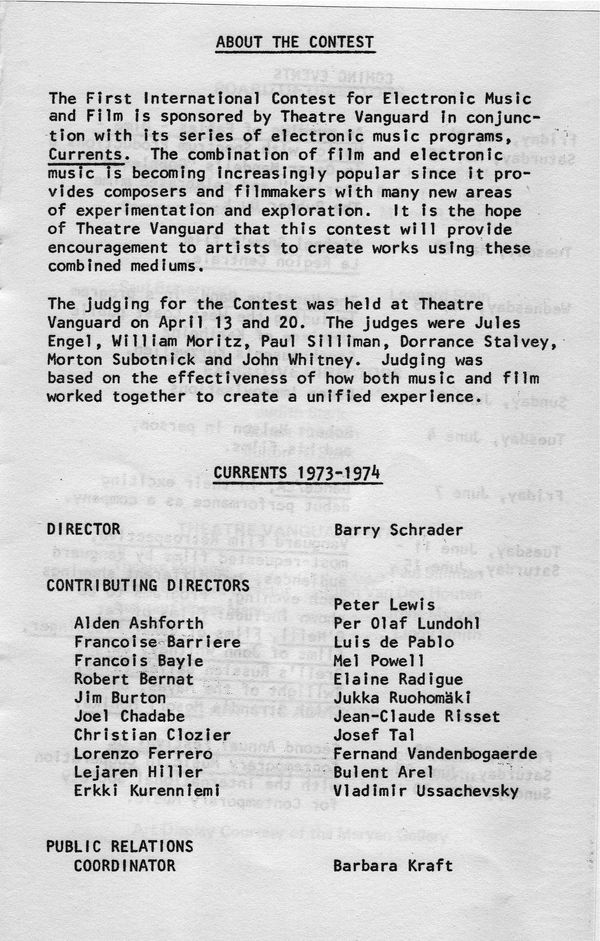 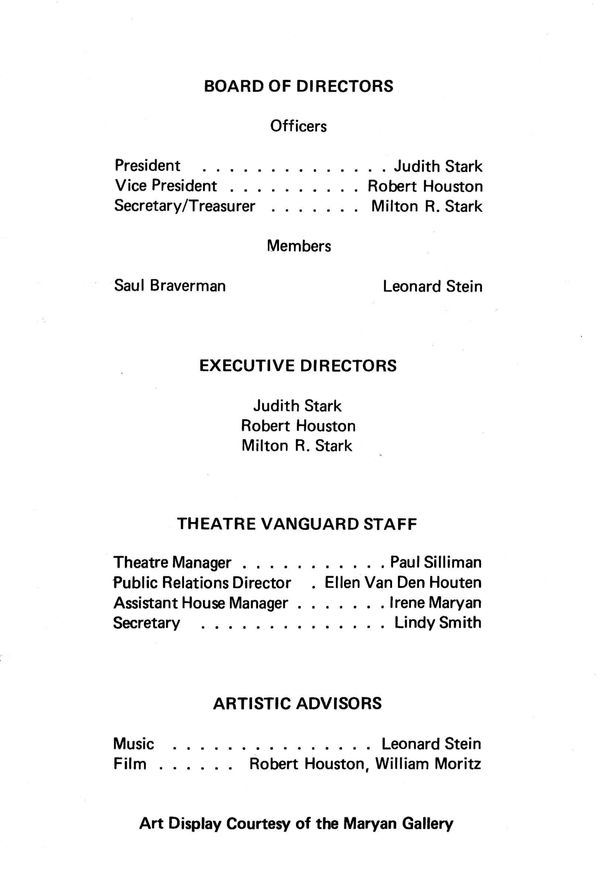 CURRENTS would present other programs featuring experimental film with electro-acoustic music soundtracks.  Here's one such program from October 24, 1975: 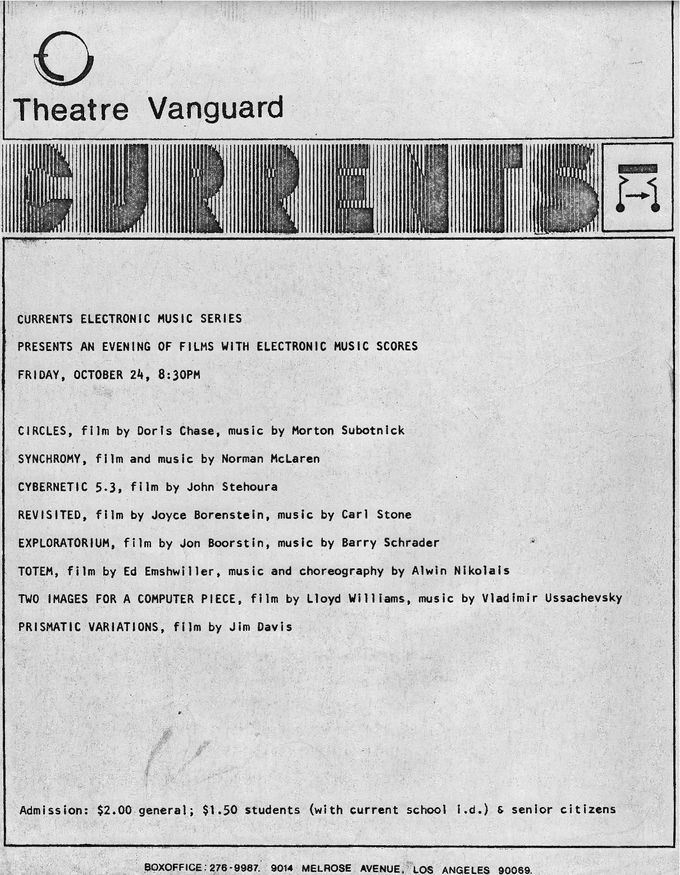 In 1974, CURRENTS presented a program of historic electronic music.  This was the first time any of these works had been presented publicly in Los Angeles: 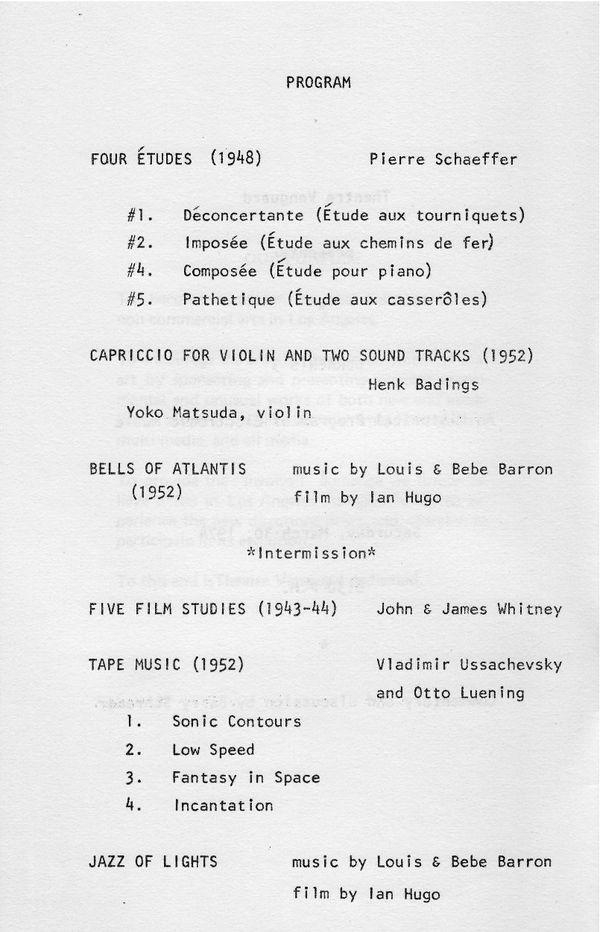 In 1973, the French composer Eliane Radigue decided to found a new center for electronic music in Ripert, France.  This was to be known as The Ripert Centre.  Here is a statement of the organization's goals: 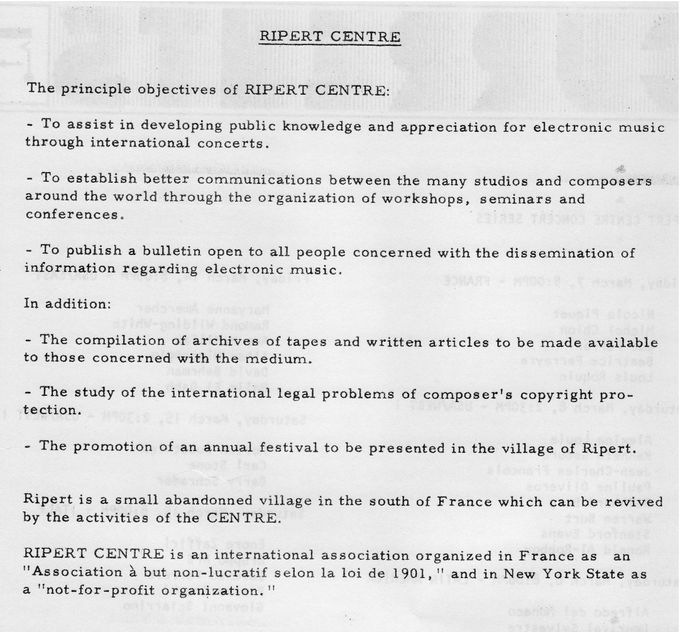 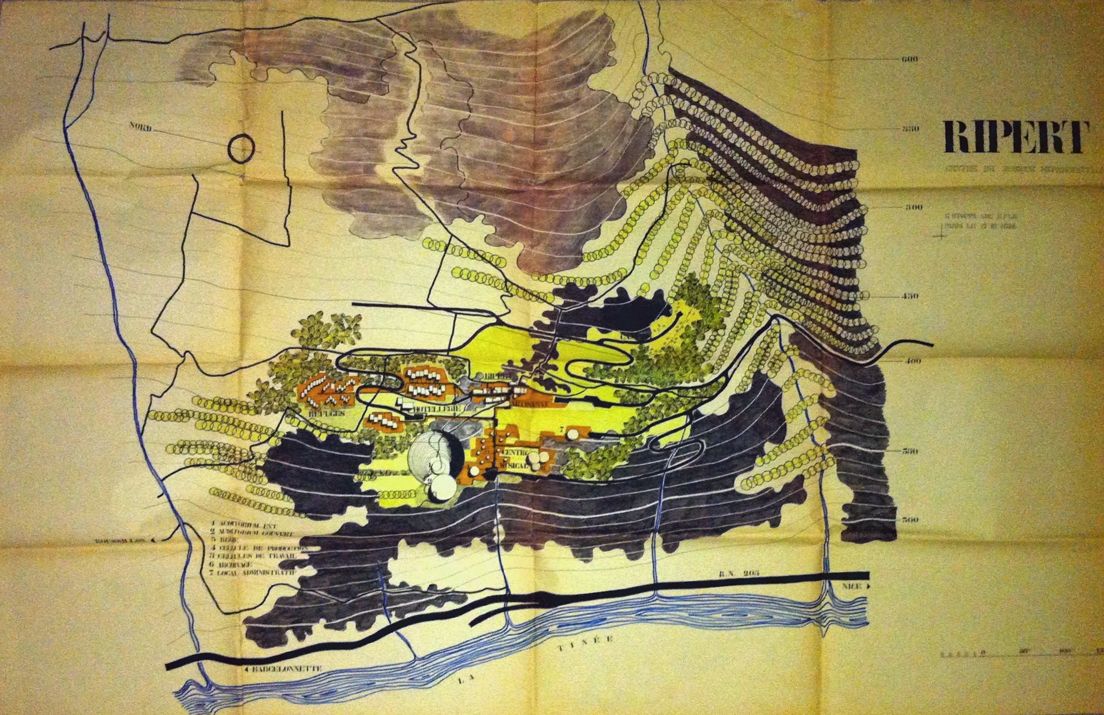 Unfortunately, the Ripert Centre never materialized.  But CURRENTS did present a series of concerts in March of 1975 that were curated by Eliane and others involved with trying to set up the Ripert Centre: 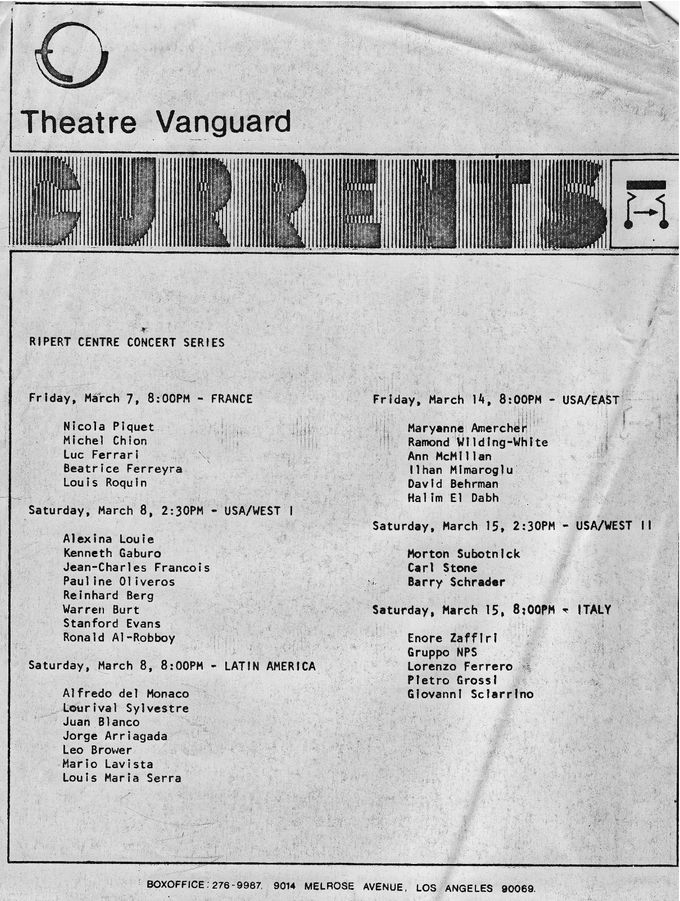 I don't know how many concerts CURRENTS presented over its lifespan, but I'll make an educated guess at between 40 and 45.  Many of the works presented were world premieres, and almost all of them were U.S. and/or Los Angeles premieres.  Los Angeles was a very different place in the 1970s from what it is now in almost every way, but certainly in terms of the impact of contemporary art and music.  The Los Angeles Times reviewed almost all of the Currents presentations, and many of the concerts were sold out.  The Theatre Vanguard had only 199 seats, but getting an audience of this size for any type of "experimental" music in LA during the early 70s was remarkable.

Like all good things, the Theatre Vanguard came to an end after the 1978 season.  It had been supported almost entirely by the Judith S. Thomas Foundation during its existence, and because West Hollywood was then an unincorporated area of Los Angeles County, and not a part of the city of Los Angeles, it was not possible to get any funding from local government sources.  There was some slight federal funding from the NEA, but not enough to be meaningful.  There was also little support from other local benefactors.  In reality, the arts world is not as beneficent as some might think, and lines of support are carefully drawn along personal and institutional political boundaries.  Ego often trumps any other consideration in the area of arts support just as it does in other sectors of human endeavor.  As the costs of producing programs and maintaining the Theatre Vanguard rose, the Starks decided that continuing to support the project was not realistic.  While they continued to be important supporters of the arts in the Los Angeles area (Judith Thomas Stark became a member of the CalArts Board of Directors), the Theatre Vanguard was closed and the property sold.  The last time I went by that location on Melrose, it was an interior design business, but that was over a decade ago, and I have no idea what the building's fate is at this moment.

I had little contact with the Starks after the Vanguard closed, but I would sometimes see them at CalArts or at concerts in the 1980s and early 1990s.  Mrs. Stark died in 2006 at the age of 96.  I did let them know, more than once, how grateful I was for having the opportunity to create and direct the CURRENTS series.

The modern world changes quickly, and even though the internet now seemingly archives an enormous amount of material, things that existed before the web was created can easily evaporate into the ether.  Such is the fate of the Theatre Vanguard and the hundreds of programs that were presented there.  Concerts and similar presentations are ephemeral.  Few will be remembered through the passage of time.  While the Theatre Vanguard was of great importance to the Los Angeles performing arts scene in the 1970s, there are not many today who remember it or know about it.  CURRENTS was but one of the series that the Vanguard supported, and it, too, is now essentially forgotten.  Even for me, without any printed documentation, most of the programs are past recollection.  I saved many of the works presented on CURRENTS and recorded on tape in the acclimatized vault of the CalArts Library.  But, several years ago, I was informed that they could no longer afford the room to store these tapes, and, as I had no place to stoe them myself, the tapes were destroyed.  So there is now, even less documentation than there might have been a few years ago.

I hadn't thought much about CURRENTS for decades, but, a few months ago, someone emailed me asking for some information about the series, and that got me to thinking about it and seeing what I could dig up about it from old boxes of material in my office and home.  There was less than I thought there would be, but, still, there was enough to document the nature of the series and also of the Theatre Vanguard.  Nether the theater nor the series are things that could happen again; they were products of their time and place.  But they were, I think, special and important in what they attempted to do, and, perhaps, they won't be entirely forgotten in the future.