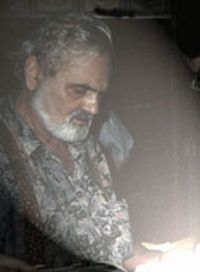 In 1992-93, Salvatore Martirano was a visiting composer at CalArts.  During this time, I interviewed him regarding his work and thoughts on electro-acoustic music.

Schrader: As one of the pioneers in the field of electro-acoustic music, what do you think are some of the most important recent developments in that medium?

Martirano: The evolution of computers and storage systems are probably the most important developments in the last decade. It’s now possible for composers to have powerful and affordable computer systems to compose with at home. In addition, the standardization of equipment through MIDI has made hardware easier to use.

Schrader: Does the ongoing development of equipment and software cause you problems? Are you bothered by always having to learn new things?

Martirano: Different composers’ personalities will lead them to different musical life styles. Consider the African finger piano musician who spends 50 years going deeper and deeper into the five or ten tines of that instrument, gaining an ever-increasing understanding of that world. Juxtapose this with the artist who is attracted by new media. Here there is the disadvantage of always being a beginner because the technology is constantly changing. Most of the so-called “master” composers were people who used the same resources and forms over and over. I’m fascinated with pursuing new technologies and new ideas, rather than with writing my sixtieth piano sonata. So, for me, frequently changing technology is intriguing.

Schrader: What do you see as the main influences in your music?

Martirano: In the 40s I had a big band, and later graduated to a small combo that played the USO shows and similar functions. Improvisation was an important part of what Iwas doing then, and it continues to be significant to me now. I also had an early education with the “classics”, starting with my piano studies at age five, and continuing through formal training at Oberlin and Eastman. So both worlds have shaped my thinking.

Schrader: Has the technology you’ve worked with influenced your musical development?

Martirano: Of course, particularly with what’s been available at the University of Illinois over the years. As you know, there has been considerable research and development in computers at Illinois ever since the late 50s. I probably have as many friends in the computer department as I do in the music department. It’s sort of a matter of landscape: the resources were there and I’ve made use of them in my work.

Schrader: In your April 10 concert at Barnsdall Park you presented three recent compositions, two of which used taped electro-acoustic music with live performers, and the third of which was a live/interactive work with you performing on a DX7 and your wife Dorothy playing the Zeta violin. Are there significant differences from your point of view in performing with prerecorded versus live material?

Martirano: In some of my recent works I’ve been able to improvise with my yahaSALmaMAC MIDI orchestra and the Sound and Logic (SAL) program and produce music that, although initially improvised, was later edited to the degree that I felt necessary. Sometimes, this is very little. These results are possible because I’ve created the program and interfacing to do the kind of things I want. For instance, I can improvise on a keyboard into the program, and then have the output go into a second computer that makes orchestration decisions with every MIDI note on event according to a probability ladder. The result of this is an explosion of timbre changes in the electronic music. This same process can also be used in real-time to invent music on the spot, as I did in the third piece, Four not Two at Barnsdall. There was the same amount of improvisation in all three pieces on the concert, but the works with prerecorded electronics were edited, while the real-time piece had no editing: it exited as it happened.

Schrader: Do you think that the audience shares the same sense of improvisation in real-time electro-acoustic pieces as the composer and performers?

Martirano: We use the word “improvisation” and I guess we think we know what we’re talking about. There seems to be a difference between the music that involves reflection (returning on Friday to Tuesday’s inspiration), and the music that is “in the air”: performance that’s there and then it’s gone. I’m fascinated by both activities.

Schrader: What are you working on now?

Martirano: I’ve just finished Isabella, a work for chamber orchestra written while I’ve been in residency at CalArts. It’s dedicated to the patrons of explorers, and it contains absolutely no improvisation. Isabella will be performed by the Bucharest Symphony. I’m also composing music for Capybara, an array of nine digital signal processors designed by Kurt Hebel at the University of Illinois. I have a program that talks directly to Capybara, and I’m attempting to develop “computer synthesis” in real-time using digital signal processors. So far I’ve put samples of my voice on disk and have manipulated these through MIDI.

Schrader: What are your feelings about the current state of contemporary art music? How do you feel about the idea that art music is dead?

Martirano: Contemporary music is fine. There’s the great and not-so-great, as always. Actually, I’m not certain what “art music” is. Perhaps there’s only music. But, I guess, by some definition, there is art music. And, I suppose, some art music is dead. I hope not mine!